Why we prefer UltraShape Power over CoolSculpting – written by Dr. Dima

Written by dr.dima@wellmedica.com on January 13, 2017. Posted in Aesthetic Blog.

There is a saying in medicine: “if you ask 10 doctors you’ll get 10 different answers.” I often get asked my opinion about the most effective non-invasive technologies, both by patients and by colleagues. We’re all pretty opinionated about our beliefs but sometimes I take the extra time to convince people about one technology over another. Whether to get CoolSculpting or UltraShape Power is one such instance. I have had a lot of experience with both, including having had both treatments myself. Here are the main reasons I favor UltraShape Power over CoolSculpting for non-invasive body sculpting. 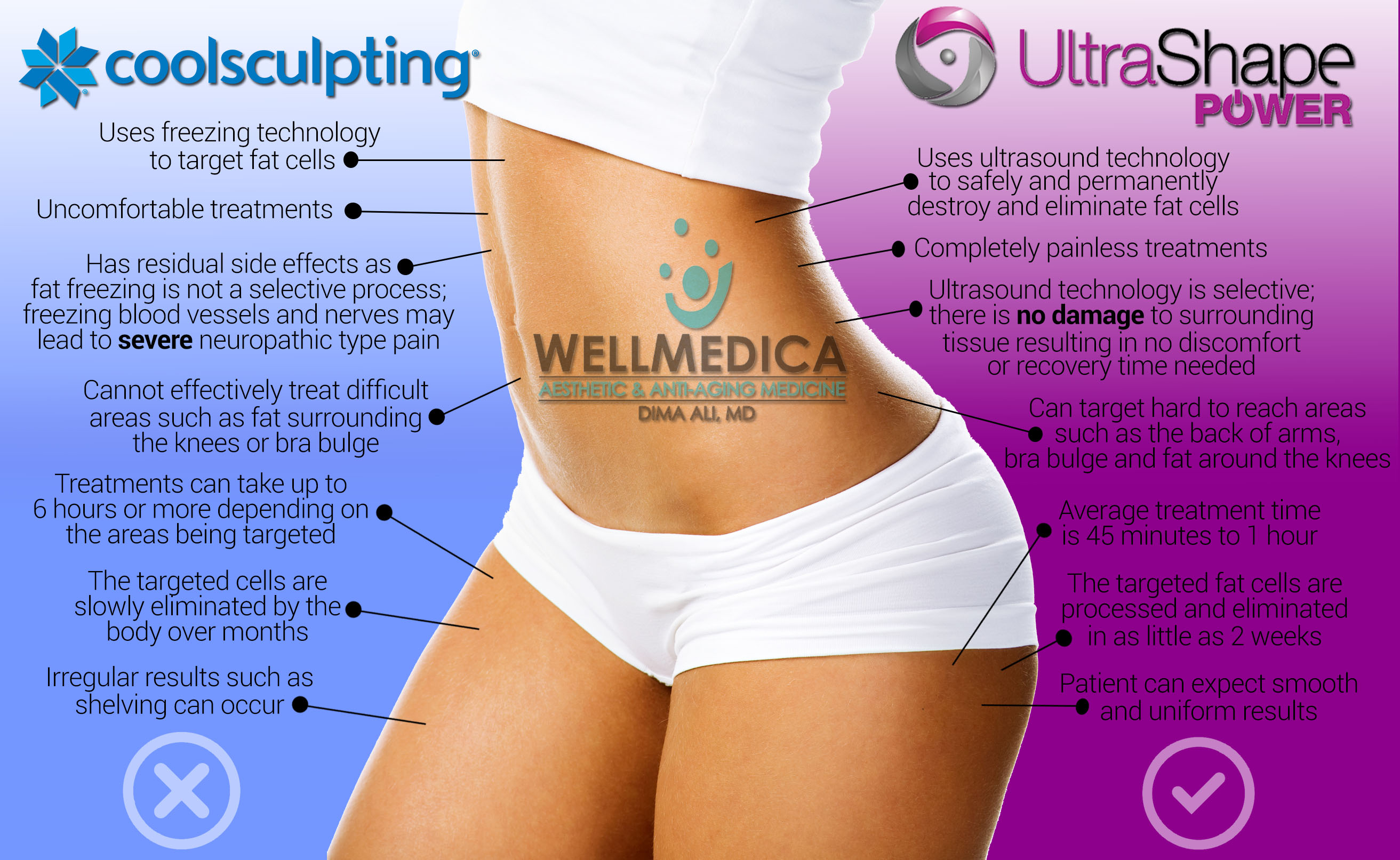 What are the main differences in how these two technologies work?

Both technologies are categorized as non-invasive body contouring treatments but they do have significant differences that are worth considering. As the name implies, CoolSculpting uses freezing to target fat cells that are destroyed and eliminated by the body over several weeks. UltraShape uses ultrasound technology to essentially do the same thing. Another difference is that CoolSculpting is performed by hooking the person up to a machine. The patient is then usually left in a room, and treatment is conducted without a technician or doctor present. Ultrashape on the other hand is performed by a person. Either a Doctor or technician that is trained in handling the technology conducts treatment.

Are both technologies safe and painless?

Here is where I have a somewhat unyielding opinion. Whereas UltraShape is completely painless, CoolSculpting is uncomfortable but, more importantly, I think CoolSculpting has residual side effects that warrant a closer evaluation. It has been documented in the medical literature that CoolSculpting can have a very painful residual side effect that resembles neuropathic pain. I personally suffered from this after an abdominal treatment. It was debilitating to say the least and ultimately required anesthesia just to get me through the day. On the other hand, Ultrasound technology can distinguish between different kinds of tissue. Freezing cannot. Freezing fat also freezes blood vessels and nerves which, in my opinion leads to the neuropathic pain that some patients experience after this treatment. With UltraShape, there is no damage to surrounding tissue and hence no discomfort or recovery.

Can CoolSculpting treat my arm fat or bra bulge?

Simply put, no. Ultrashape can target hard to reach areas that CoolSculpting cannot. For example, the back of arms and fat around the knees.

How long do these procedures take and how long will it take me to see results?

You need a much longer time commitment when getting CoolSculpting treatment. Expect to spend up to 6 hours or more depending on the body areas being targeted vs. an hour to an hour and a half with UltraShape Power. Another advantage of Ultrashape is that results are visible much faster than with CoolSculpting – just a few weeks vs months.

After all the experience I have had with both CoolScuplting and UltraShape Power, I believe UltraShape is the clear winner. If you have any further questions about this article please call our office at 703.787.9866. You can also visit us at 1801 Robert Fulton Drive, Reston VA 20191.