Written by dr.dima@wellmedica.com on October 2, 2015. Posted in News.

* This article was written by Tracey Neale and Samara Martin-Ewing *

It’s liposuction without surgery. Roberta Flack does it. Super-models do it, but should you? “Mesotherapy,” or “Meso” as some call it, is a French weightless treatment women in Europe and Brazil have been “secretly” doing for 50 years.

The procedure consists of a series of little shots that are said to melt fat away, but it’s what’s “in” the syringes that has “some” doctor’s concerned.

Dick Neely had a problem with his love handle area. Those love handles aren’t weighing him down anymore, however. Dick is a part of a growing trend; men and women hoping the controversial treatment, Mesotherapy, will shrink their fat cells until they just melt away and they will not have to resort to Lipsuction.

“It’s great for the lower third of the face, for the neck for example. … I’ve done it on areas like the front bulge near the bra area…the inner and outer thighs…and buttocks, and inner knees,” Dr. Dima Ali said.

Dr. Ali uses a complex cosmetic cocktail of drugs and vitamins. Each “designer dose” is conjured up specifically for each patient. He uses artichoke extract, which is artfully injected right into the “Meso” or “middle layer of the skin.”

The procedure’s primary side effects are a transient burning and itching. But everybody is inevitably going to get swelling and bruising.

There’s another problem, says Dr. Tina Alster. The drug, while FDA approved for other uses, are not approved for weight loss. And depending on who creates your cocktail, they might include asthma and high blood pressure medication.

“There are a lot of controversies with Mesotherapy. Including is it safe? Is it effective? How long term is it?,” Dr. Alster says.

But none of that scares Julie Short. She swears by the shots. “Dr. Ali rocks!,” she said.

Judging from Julie’s before and after photos. She explains, “Basically I have these rolls here that were very bothersome to me.” It’s always been a problem. I was actually 30 pounds less than I am now at one point in my life, and I still had that problem,” she said.

Dr. Alster says, “I don’t think Mesotherapy right now is real medicine. That doesn’t mean with time and proper testing in the long term analysis of the tests that it couldn’t be.”

Dick says it took only two treatments to rid his waist of the inches he’d spent years trying to exercise off. A regiment he knows he must continue. “I think if you do this you don’t do it alone. You do the Mesotherapy but you also still exercise and maintain good nutrition. And it will enhance the results of the treatment that you will get.”

Although the needles are small, they are not painless for everyone. There is no anesthesia. A local numbing cream is used before treatment.

There are only 500 American doctors who offer Meso right now. Including Dr. Ali in Reston. Insurance does not pick up the tab. This is considered cosmetic surgery even though you don’t actually go under the knife like you do with liposuction. And the price tag can run $400 to $800 a session. We should also note Dr. Ali says Mesotherapy is not for the obese. She prefers to do the procedure on those who are no more than 30 to 40 pounds overweight. Learn more about Mesotherapy by Dr. Ali at WellMedica. 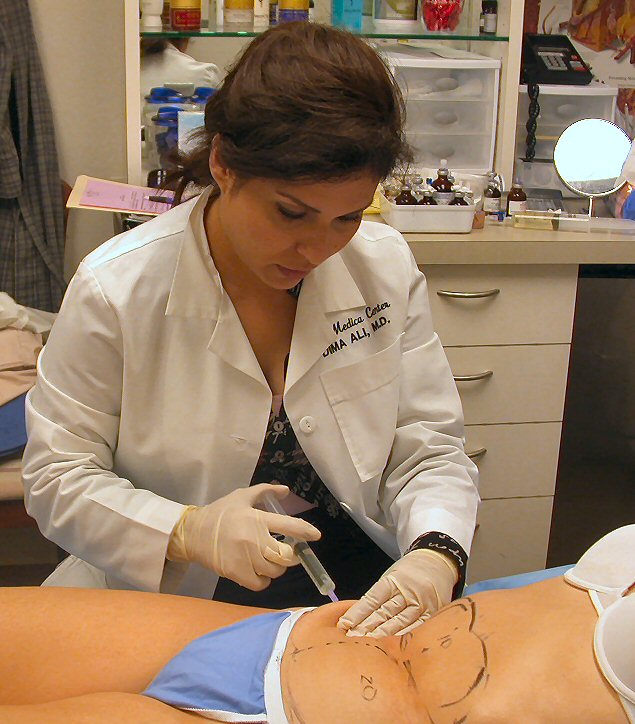 Dr. Dima with an actual patient