Nigella Sativa The Seed of Blessings

Written by dr.dima@wellmedica.com on April 23, 2020. Posted in Aesthetic Blog. 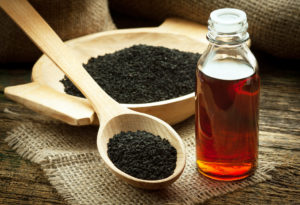 Nigella Sativa is a plant that grows wild in the Middle East and North Africa. It is the source of a very potent black seed that has medicinal and therapeutic properties that have been used for thousands of years. Growing up in North Africa gave me access to many herbal remedies that were indigenous to that area. I became familiar with Nigella Sativa at a young age as it was always a staple in our kitchen. My mother, sisters and I suffered from eczema and my mother, in particular, could not tolerate any over the counter skincare. I became determined to create skincare formulations that we could all tolerate without breaking out in a rash. Since I had access to many raw ingredients, I had the opportunity to experiment (and use my family as guinea pigs!) for my many lotions. This is how Nigella Sativa became, and still is, one of my favorite skin care ingredients.
It is not a well known ingredient in western cultures but I am hoping to bring more awareness to its vast healing properties. Its history dates back to ancient Egypt and, in fact, it is cited in the Bible, the Torah and the Koran. Cleopatra used it for its healing and anti-aging properties. It is also known as Habat el Baraka (which means seed of blessings) in Arabic. The Romans referred to Nigella Sativa in Latin as “remedium” or “panacea,” and considered it a cure all. Hippocrates, the father of modern medicine’s scientific approach to disease, treated many ailments with Nigella Sativa.
So what gives Nigella Sativa its healing properties? Nigella Sativa has enzymes, vitamins, minerals and is high in essential fatty acids. Of particular note, however, are two bioactive compounds – Nigellone and Thymoquinone that are responsible for most of the medicinal and pharmacologic properties of Nigella Sativa. There are numerous studies that demonstrate the mechanism of action of these actives on inhibiting enzymes like protein kinase C which plays a role in causing inflammatory responses. There is also evidence that Nigellone has an inhibitory effect on oxidative energy metabolism suggesting that it plays a protective role in inhibiting mast cell release. Simply put, these substances are protective and work to decrease inflammation.
Nigella Sativa has anti-bacterial, anti-viral, anti-parasitic, anti-inflammatory, anti-oxidant and even anti-carcinogenic properties. Traditionally, it has been used for digestive problems, airway inflammation such as bronchitis, chronic pain, diabetes, hypertension and infection. Dermatological uses include treatment of skin ulcerations and abscesses, atopic dermatitis and other skin allergies, psoriasis, hyperpigmentation and wrinkles.
Through my decades of use and research, I firmly believe that Nigella Sativa is one of the most powerful natural healing remedies in the universe. I use it in every one of my skincare formulations. In fact, there is no other topical product on the market today that uses Nigella Sativa in synergistic combination with Vitamins A, C and E and other botanical extracts, except my own brand, COSMINOLOGY.

* Can only be used towards your first treatment. New Patients Only. Exclusions Apply.